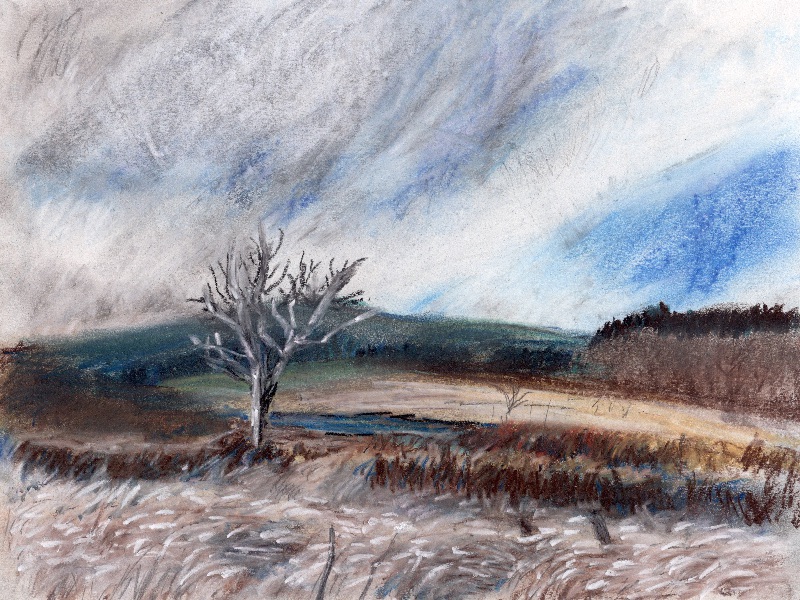 PENTLAND DAYS
During lockdown I decided to do a drawing project about the local area. I wanted to look at the Pentland Hills, where I have lived for 23 years, and see it afresh. So on my daily walk I found a scene or a vista or a detail that I wanted to do a drawing of. These are the results. All pictures are 21 x 29cm. The originals are available to buy. I've also had high quality Giclee prints made which can be bought for £30 each. Please contact me for more information and to order a print. 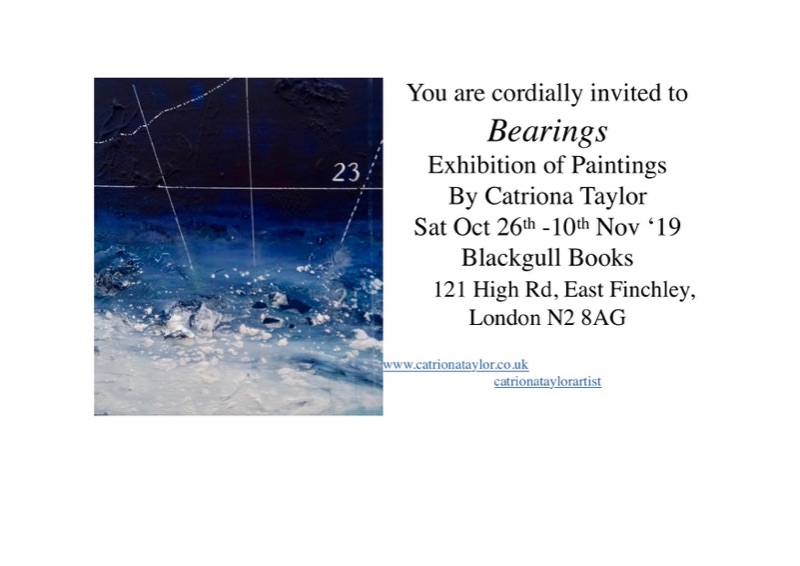 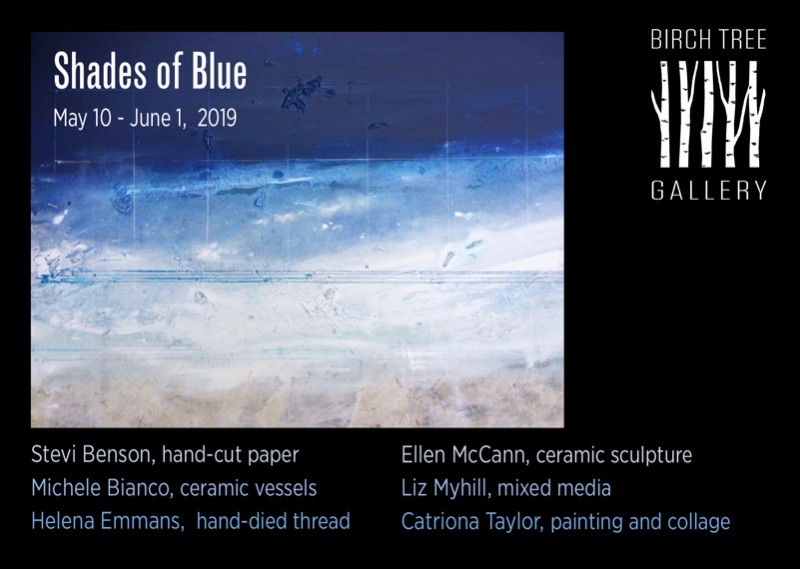 August 2016
Land and Sea
I have a solo exhibition at Chambers Institute, Peebles from July 30th - Sep 3rd. Opening times:
Monday – Friday
10.30am – 12.30pm & 1pm – 4pm
Saturday 9.30 - 12.30pm
The exhibition explores themes suggested by words from the Shipping News to evoke a sense of our coastal landscape.

This has been a very busy year as my Leverhulme Artist in Residency with the Scottish Centre of Diaspora Studies came to a conclusion with an exhibition at the the National Museum of Scotland as part of an International Conference on Global Scots Since the 1700s directed by Sir Professor Tom Devine. I also showed the work in august at the Scottish Parliament.

This unusual exhibition displays the collaboration of two different visual artists with a poet, over several different projects.

A piece of visual art, or a poem, requires any viewer, or reader, to interpret it through the use of their own imagination, memories and experiences. The process is two-way, and is in itself creative.

When a poet and an artist work together, they too are seeking new ways to look, and finding new layers in the other’s practice that in turn nurture their own. All these collaborations have created their own absorbing journeys.


June 2013 South by South East 3 or 4
I currently have a solo exhibition at Amber Arts, Montrose Terrace, Edinburgh, EH7: http://www.amberarts.co.uk/exhibitions.html running until the 29th of August. This is a painting show and this is what Amber Arts have to say about my work: " Catriona Taylor’s painting is inspired by the Scottish coastline and looking at landscape and coastal scape from google earth.
She builds her painting , using maps, collage materials, text and by pouring paint onto the surface. She uses the words of the Shipping Forecast to suggest the powerful force of the sea and our attempt to try and chart it and make it safer."


August 2012
I have just heard that I have been awarded a Leverhulme Grant to be Artist in Residence at the Scottish Centre of Diaspora Studies at Edinburgh University. I start in october and am very excited.
http://www.ed.ac.uk/schools-departments/history-classics-archaeology/news-events

This has been a very busy year. I have been working on a project called Fetlock Deep Fetlock Deep - commissioned by the Eastgate Theatre, Peebles. An investigation of equestrian culture in the Scottish Borders which comes to fruition in November with an outdoor installation near Traquair of horse names, memories and drawings on slate. There will also be an exhibition at the Eastgate Theatre in November that will feature the work we have made. See the Eastgate website for more details.
www.eastgatearts.com

I have also been hard at work on a commission for the Alchemy Film Festival in Hawick in the Scottish Borders.
The film Kick Oan tells the story of the Hawick Common Riding through the voices of the Hawick people.
The film embraces a 500 year old tradition of riding the town’s boundaries with all its attendant ritual, tradition, laughter and tears. It shows a community brought together annually, to remember the decimation of Flodden, a battle still etched in the collective consciousness of the Borders.
The real heroes of the film however, are the horses, that so gallantly bear the riders through the nine ride outs. They are revealed in the stunning landscape of Teviotdale and in quieter moments in the stables.
www.alchemyfilmfestival.org.uk
NEWS: November 2010

I currently have work in 5 different Galleries: Hope you can make it to one of them!

I was delighted to have had work accepted by the RSA Open Exhibition which is on now until the 15th December at the RSA Gallery on the Mound, Edinburgh.

OFF THE WALL - Gracefiled Arts Centre, Dumfries. From 13th Nov until 24th December.

I have recently been awarded a grant to research and ride the Cross Borders Drove Road to make an exhibition of the experience. The grant has been awarded by CABN/Scottish Arts Council Artists Awards
I plan to film the ride and show that as part of the exhibition.
I have ridden some of it already but it probably has been the hardest winter in a long time to attempt to do such a long ride. I have been constantly thwarted but am making work in my studio based on drawings I have already done.

At almost the same time I will be showing a site specific installation about the drove roads in the Pavilions of Traquair House, Innerleithen, 18th August - September 26th September
Exhibitions on at the moment.

I finally have a date to do the four day ride. Myself and two friends plan to start from Hawick on Saturday 22nd May, then ride to Ettrickbridge that day. Stop over at the Cross Keys Pub in Ettrickbridge on the Saturday night, then ride onto Peebles over the long sweep of hills above St Mary's Loch. We will leave the horses at Kailzie Riding Stables, spend the night in the comfort of our own beds on the Sunday night, then ride to West Linton on the Monday via Rommano Bridge and onto Balerno across the wild moor by Baddinsgill on tuesday. I can't wait.

Workshop Programme I will be doing workshops for primary schools in the Borders, schools that are situated near the path of the drove road funded by Scottish Borders Council. to book a workshop contact Susanne Batchelor, Cultural Coordinator at
sbatchelor@scotborders.gov.uk

Votive for the Forgotten: Theatre Workshop, Hamilton Place, Edinburgh, EH4. The site specific installation that I did in Dumfriesshire as part of Spring Fling is now showing at Theatre Workshop as part of their Fringe Festival programme. It is open from 10am -11pm every day except Sundays. The exhibition is featuring Jean Atkin's sensitive and thought- povoking poems as a sound installation.

Across Waters: The Gallery, Tweedale Museum, High Street, Peebles. 15 August - 19th September
Focusing on Highland and Lowland landscape and history and in particular on the stories of emigrants who left Scotland, the artist uses installations to explore these narratives. Extracts of text on slate and traces of maps appear in much of her work and central to the theme will be a paper boat covered in emigrant letters.
Next
Previous